Breeding success in our nest boxes!

For the last three months,  a range of species of birds have been selecting a favoured nest box, building their nest, laying eggs and raising young - and now it is all over for another year!  It may be over for the birds but there is one last task for the volunteers, namely to try and summarise what has happened this year and put it into context with previous years.  Here are some of our initial findings.

There were nesting attempts in 68 of our 170 nest boxes by one of 7 species of bird.  We recorded the normal species of tawny owl, jackdaw, blue tit, great tit and coal tit but this year had a single successful nest of both pied flycatcher and redstart.

After two poor years the numbers of pairs of blue and great tits increased back towards the levels recorded in 2008 and encouragingly the numbers of chicks ringed this year was significantly higher than in 2008.  There was a record-equaling number of 5 pairs of coal tits, which all reared large broods of 9 or 10 chicks to the ringing stage.  There were two pairs of owls, one which reared an early brood (see Blog of 2nd May) and another which was several weeks behind this one.

We will complete the statistics for this year when we finish cleaning out all the boxes and after this we will communicate our findings in more detail to those people who 'own' a box as part of our Adopt-A-Box scheme.

The photograph below shows a typical pied flycatcher nest with a deep grass lined cup and seven pale blue eggs! 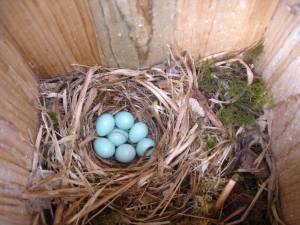