Summer work on the reserve is very different to that in the winter. With major habitat management complete, attention is turned to the upkeep of the site. Rather than working together as one big group, the conservation volunteers carry out smaller projects in pairs at different locations. Brian and John began their day by 'beating up'! This is the is the term that is used by forestry people referring to the process of replacing sick or dead young trees in newly planted woodland with healthy ones. The trees that were planted four years ago were checked. The tree tubes were weeded out and any rotten stakes were replaced with new ones. A handful of new trees were planted in the gaps where necessary. It seems that most of the young trees are doing exceptionally well and are thriving. 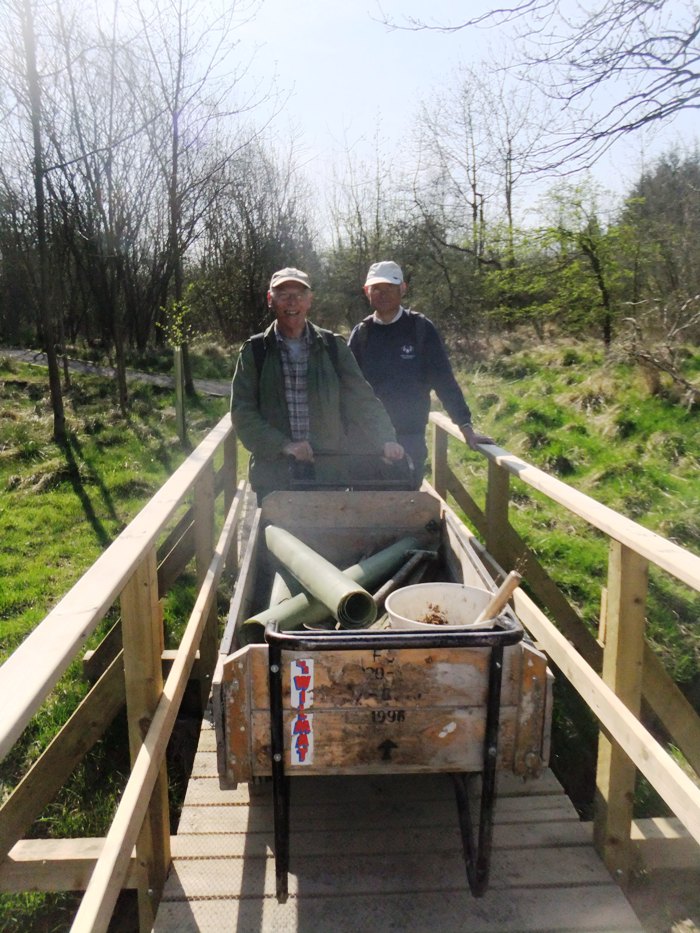 The weather was 'perfect for painting' and with this in mind several people set out to treat the many wooden benches and signs with wood preserver. 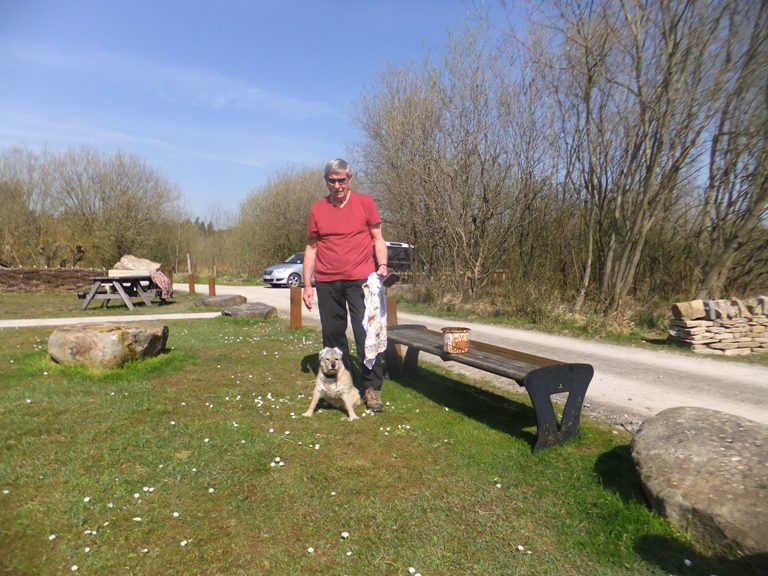 The light breeze meant that the furniture dried in no time at all. 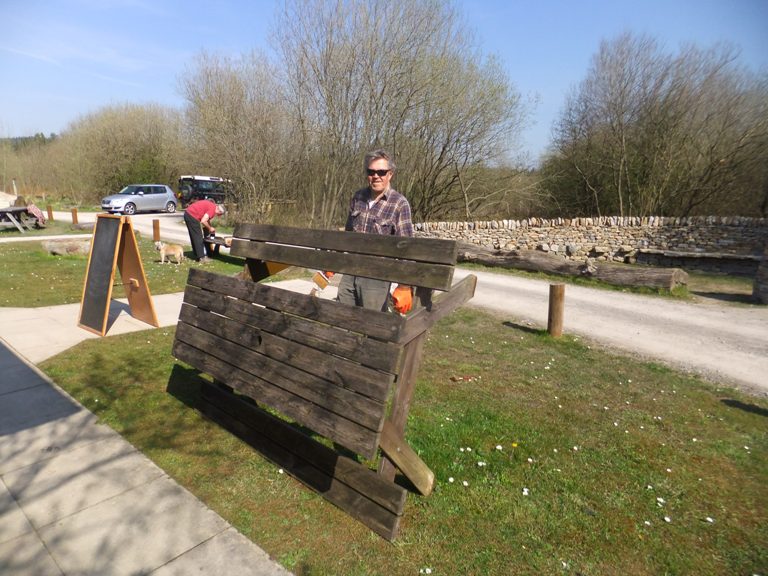 There are a dozen benches in total. Last year they had to be treated in the workshop due to the excessive summer rain. This time the painting could be done in situ and shades were the order of the day, by the end of which everyone was covered in brown paint! 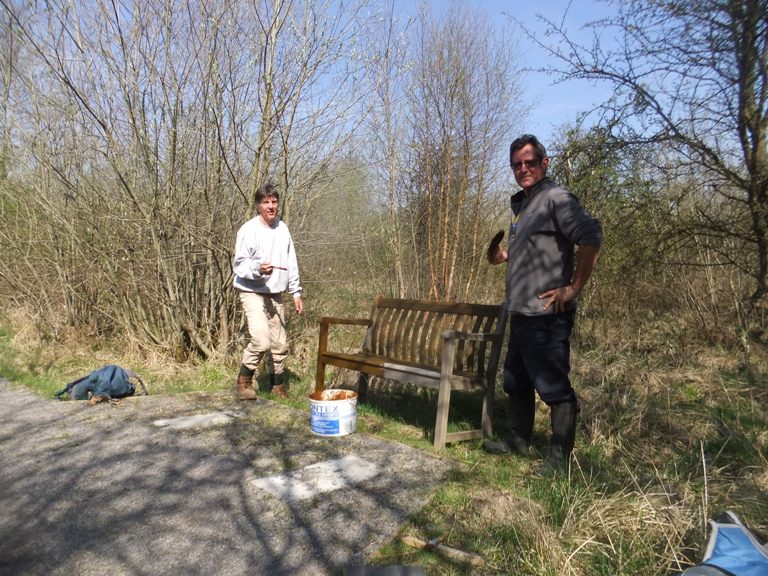 The list of jobs carried out today is endless. In addition to the painting, people helped with filling bird feeders, weighing out bird seed for the sales table, tidying away fallen trees, building bug hotels and carrying out surveys. This dead hedge was constructed along the beck to use up the very last of the brash from the winter work. It was noticed on the way to this site that the 'fedges' built earlier in the year were already home to nesting Wrens. 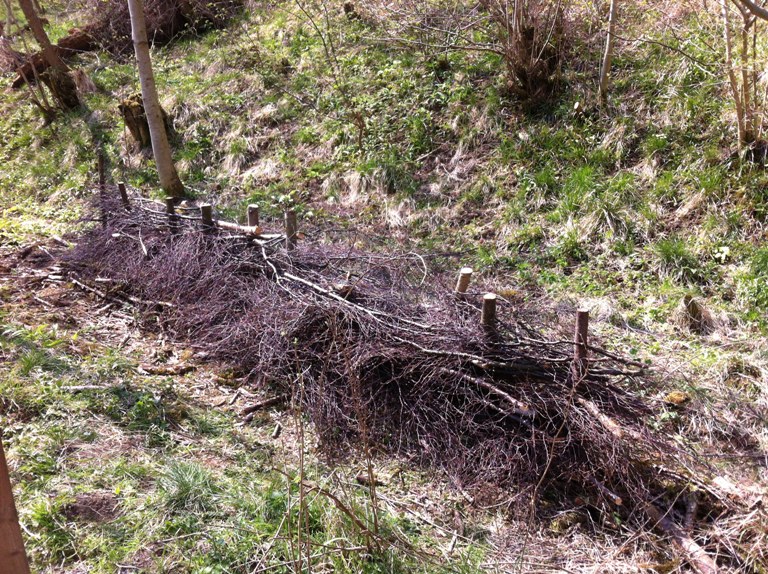 After spending the morning strimming in the spring sunshine, Ken and Eddy cooled off in Risedale beck and re-built one of the dams to provide a header pool for a pond. As you can see the pipe was well above the water level when they began. 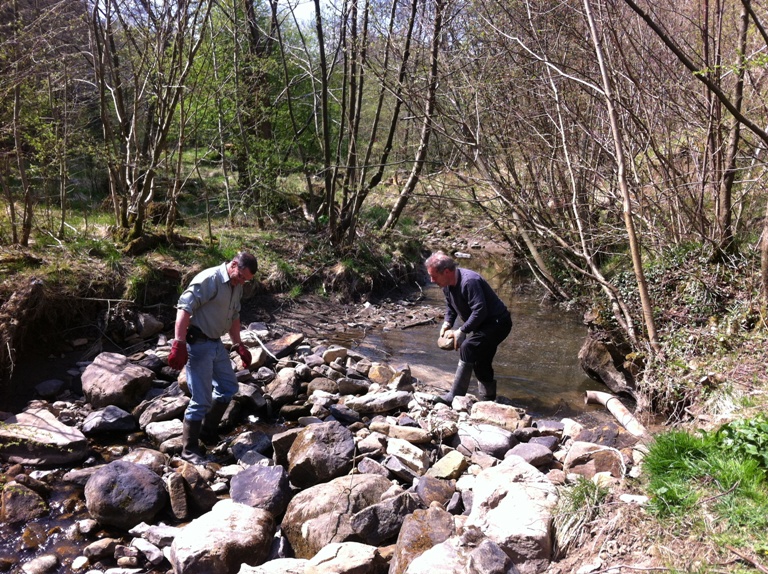 The first butterfly transect of the year was carried out by John. Peacock, Red Admiral, Speckled Wood, Orange Tip and Small White have all been observed on the wing so far this month. The background sound of Chiffchaff and Willow Warbler heard all over the reserve has been enhanced by that of Blackcap. More good news is that a Blue Tit has been seen in the nest box with a camera, her story will unfold on the main screen in the Field Centre and the first owlets (Tawny ones) were ringed out on the adjacent military training area. Finally, the back garden is still full of Lesser Redpoll (many of which have no BTO ring)!