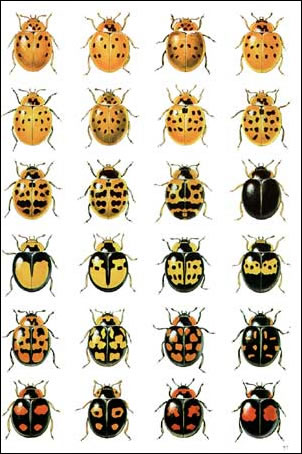 First spotted in the UK in 2004, the Harlequin Ladybird (Harmonia axyridis) has undergone a population explosion.  Successive wet summers have provided ideal conditions for them to breed, and once confined to south-east England, they are now found as far north as Scotland.  Having virtually no predators, due to much higher levels of toxins than other ladybirds, also being less susceptible to infections and parasites than native ladybirds has helped fuel the rapid population growth.

They show a huge variation in colouring and marking. 75% of Harlequins are orange with 15-21 black spots though some are yellow, some red and others black.

This insect is a top predator within its food web, and interacts with many other species.  Researchers have stated that it poses a major threat to all 45 of the UK's native ladybird species, with over 1000 other species also detrimentally affected.

They feed most commonly on aphids, though when this food supply runs low they also eat other ladybird eggs, larvae and pupae, butterfly and moth eggs and caterpillars.  Larger than most and with a wider food range they are able to outcompete the majority of our native ladybirds, in particular the Two-Spot (Adalia bipunctata), whose population fell by 44% in the UK in the five years following the Harlequin's arrival.

Not only a problem to wildlife, there have been reports of infestations of sometimes thousands of these ladybirds in homes.  Harlequins in houses, woken from dormancy by central heating, may bite people as there is no food available. The bites usually produce a small bump and sting slightly.

Luckily these have not been seen on the reserve, where we have 12 native species recorded.  If you spot any please report them to The Harlequin Ladybird Survey which monitors their numbers and spread though the UK.

The snow has started to thaw and volunteers were able to continue with tree planting. At the end of the day the mist came in from the moor and it seemed very dark. The access road is much better today but please note that due to maintenance work on the barrier, access to the reserve will be via Bourlon Barracks on Plumer Road tomorrow. 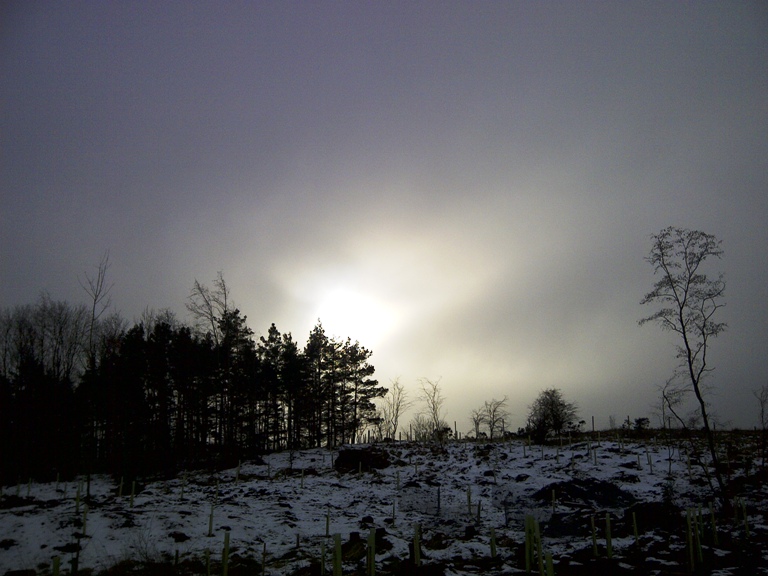