The bird ringers have just completed a four day ringing course with some guest bird ringers from the South of England. The team went to various local sites as well as spending a day at Foxglove and as usual, there were some real surprises in store. The biggest of which was catching a Fieldfare as at this time of year they should all be in Scandinavia! Fieldfares are large, colourful thrushes, much like a mistle thrush in general size, shape and behaviour. They are very social birds, spending the winter in flocks of anything from a dozen or two to several hundred strong. These noisy flocks over farmland are usually a winter scene in the UK. 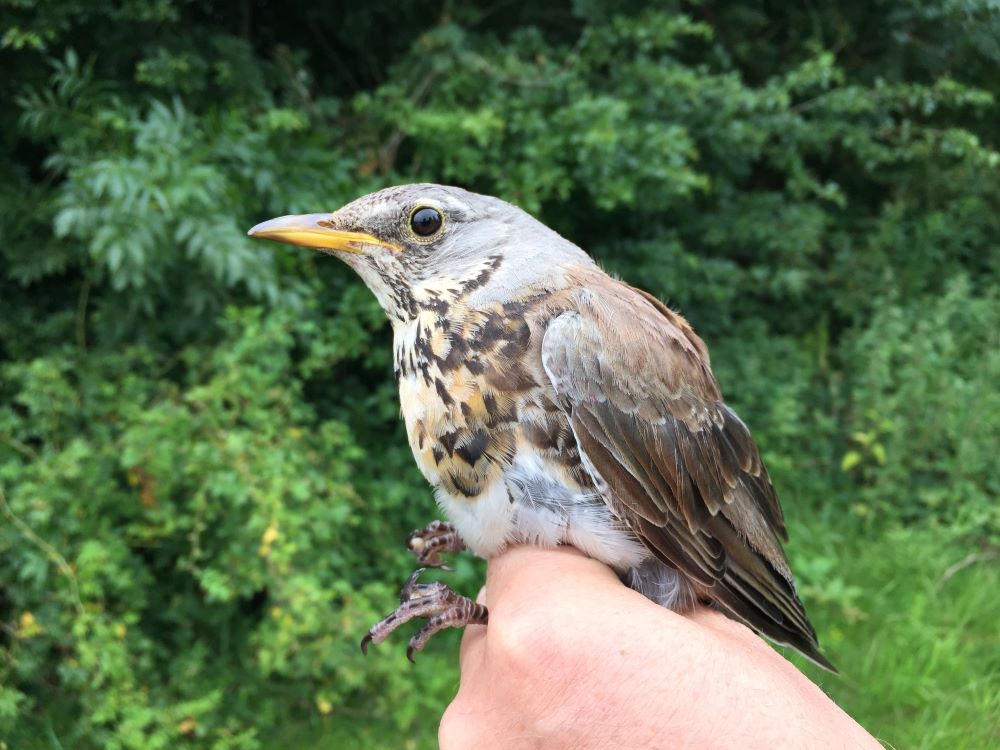 It was an adult male so has it just arrived early (they usually arrive from October onwards) or could it have overwintered in the UK? There was much discussion amongst the team members however, we may never find out! 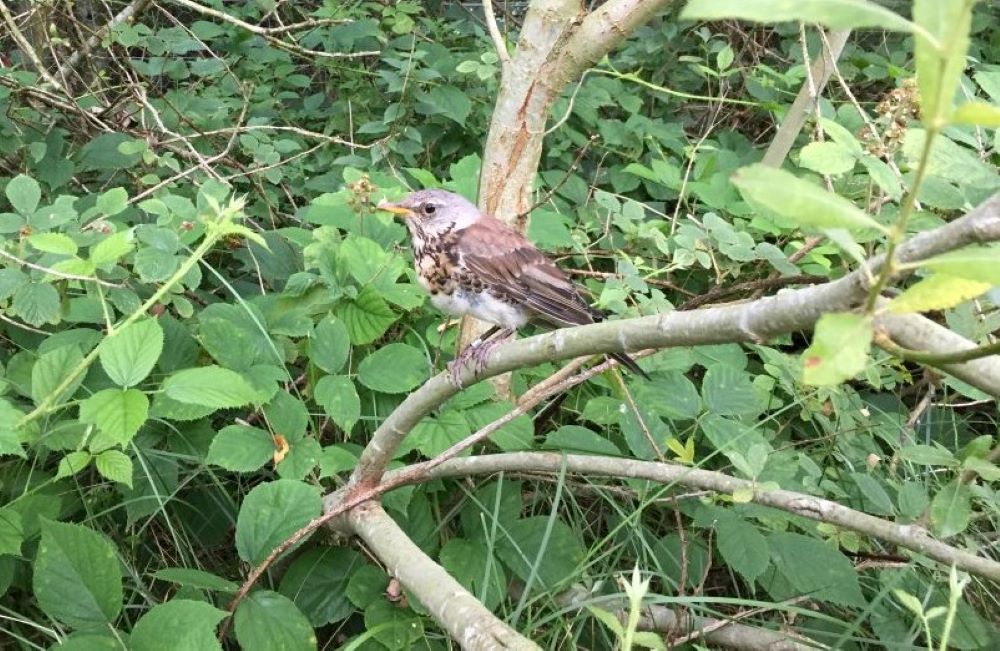 Other highlights included some young Tree Pipits that were caught on the Catterick Training Area.

They are very similar to Meadow Pipits but, on close inspection, may be distinguished by their heavier bill, shorter hind claw and fine streaking on the flank - they also have very different calls. Widespread summer visitors to the UK, they occur in particularly high densities in Western uplands. Their population has undergone declines over the past 25 years, especially in central and southern England so it was good to find a few. 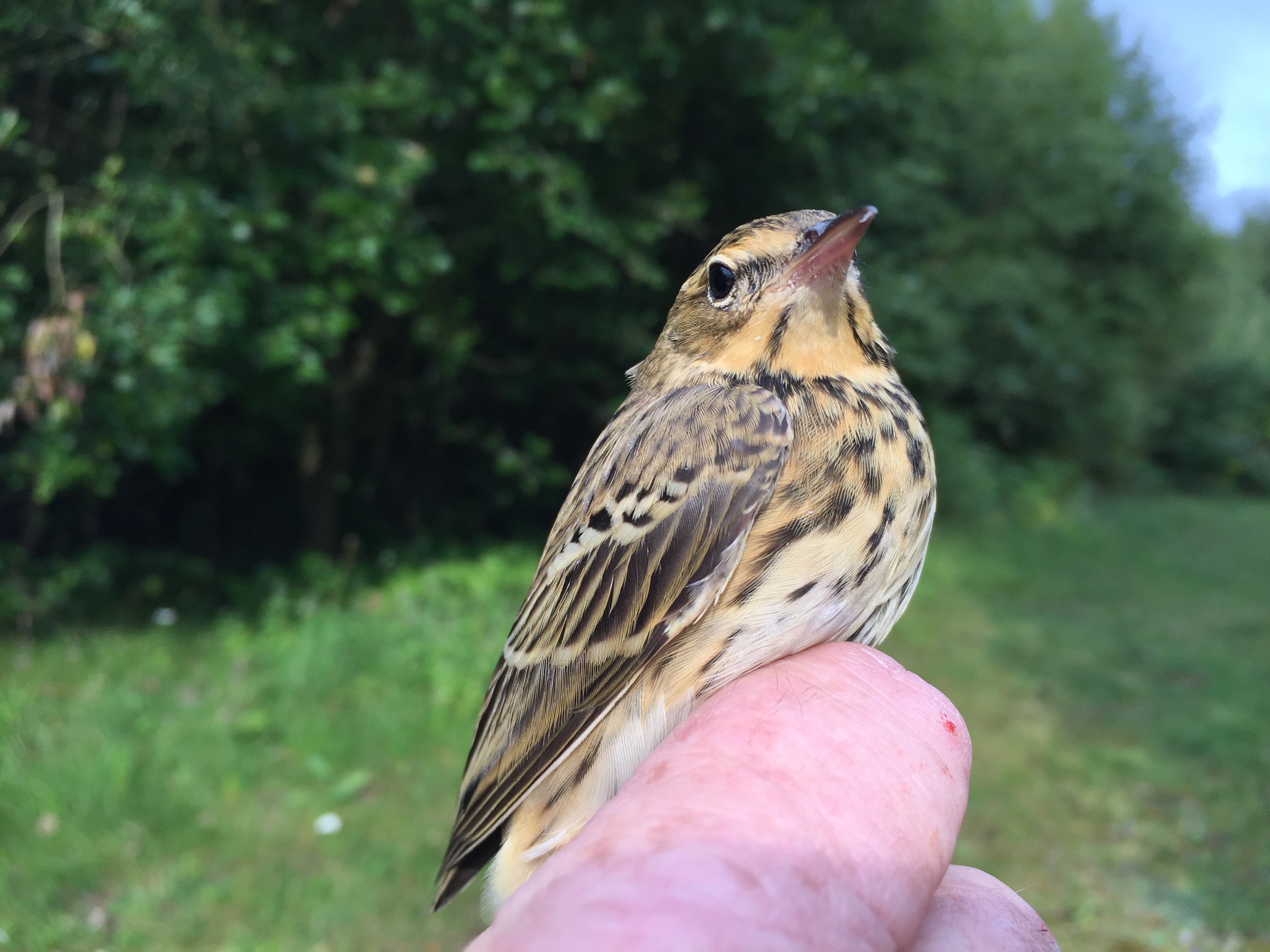 Another summer visitor, the Redstart, can be seen in the UK from April to October.  It is included on the Amber List of species with unfavourable conservation status in Europe where it is declining. This juvenile was ringed during the weekend course. 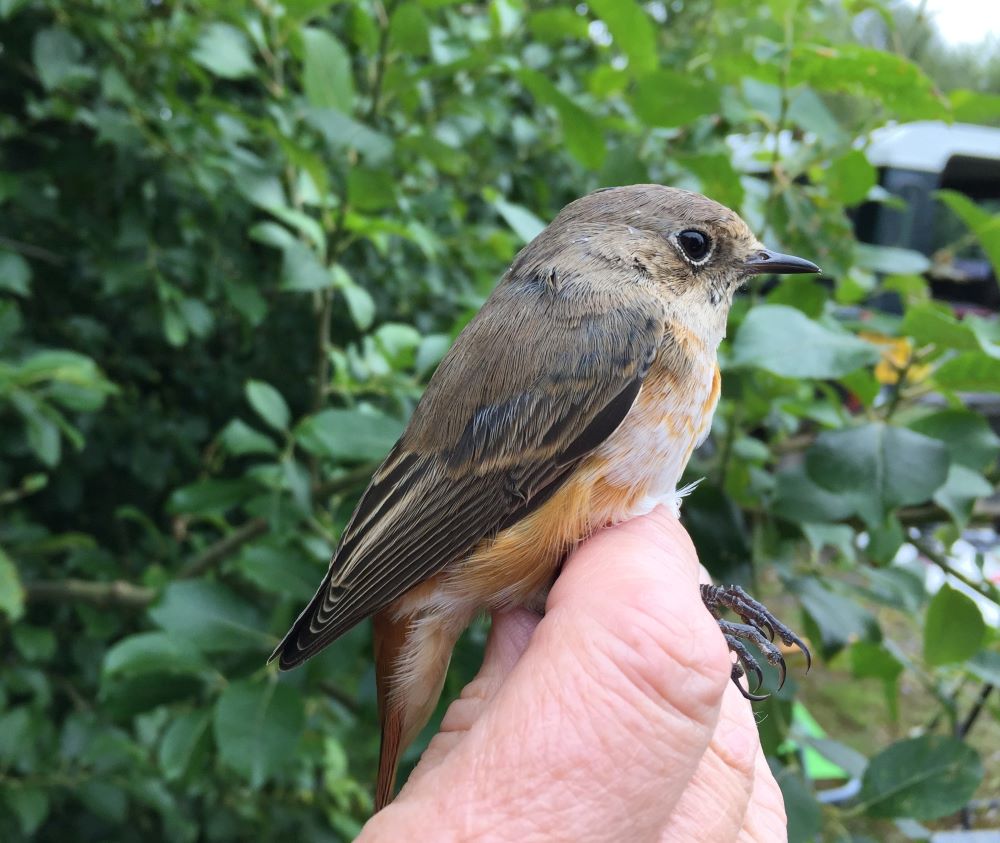 In the photograph below you can see the striking red tail feathers. 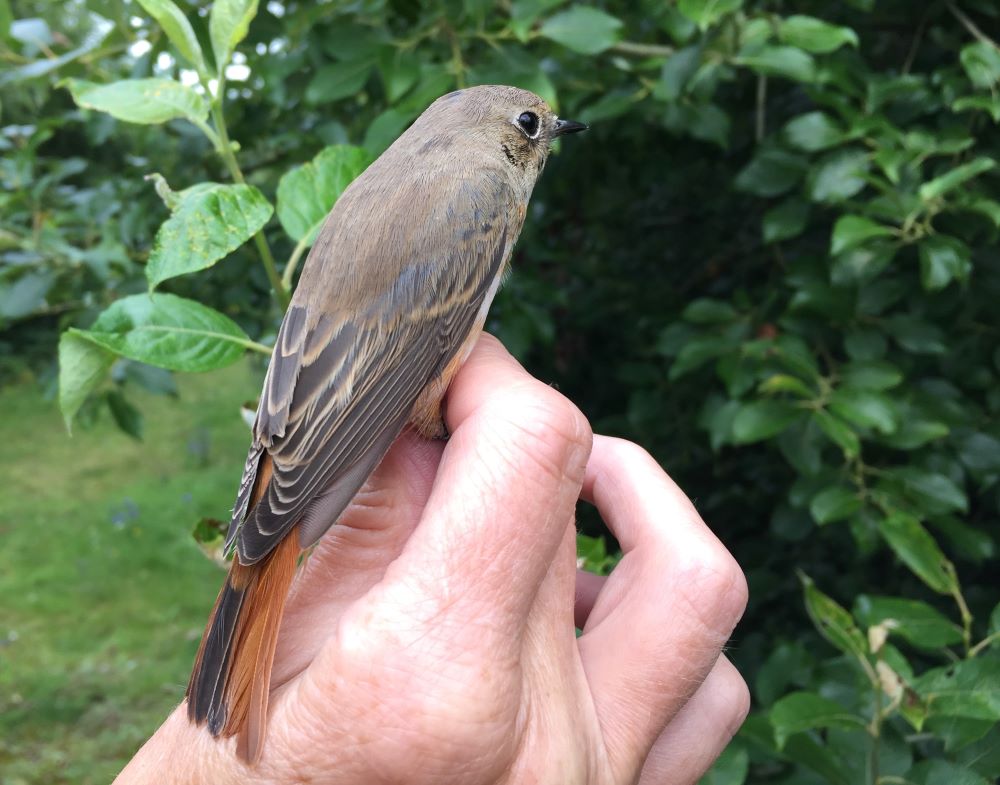 However, in terms of look there was competition from a male Redpoll still in its breeding plumage! This tiny finch - only slightly bigger than a blue tit - is streaky and brown with patches of red on its head and sometimes its breast. They like to hang upside down to feed in trees. 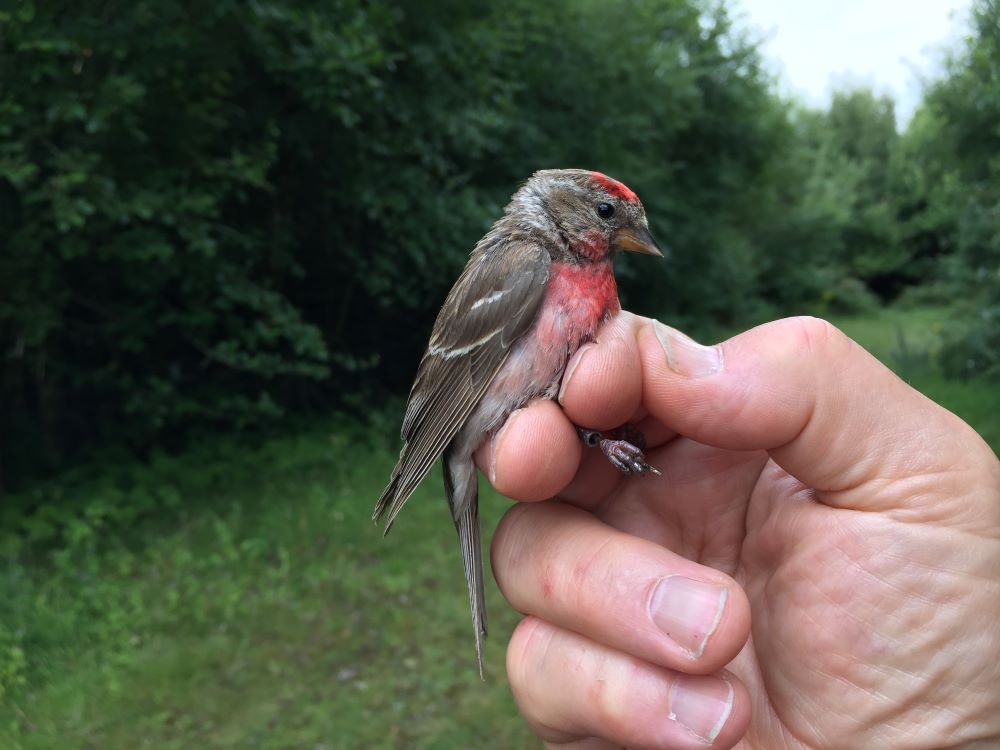 This Whitethroat was a different bird for the group to see as they are not found at the reserve. Whitethroats are medium-sized warblers, about the size of a great tit. They have quite a long tail which they flick as they dart rapidly in and out of cover. They are summer visitors and passage migrants, with birds breeding widely, although they avoid urban and mountainous areas. They spend their winters in Africa, south of the Sahara. 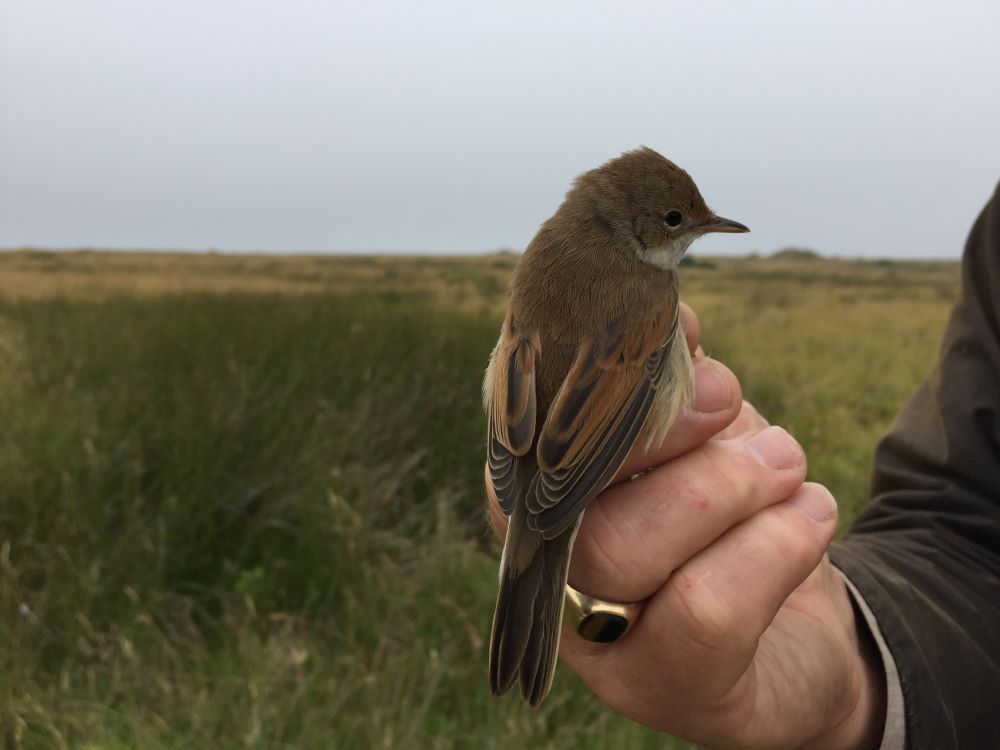 It was a successful few days with well over 300 birds being ringed in total and a great learning opportunity for the bird ringers to enjoy. Thank you to everyone involved in whatever way from strimming and pruning net rides and filling bird feeders to providing essential chocolate and ringing the birds!