Today was another day of getting as much tidying up and finishing up done as we could before the weekend. We cleared paths and tidied materials around the workshop. John kindly came in to help complete the next stage of the drainage improvements outside the Field Centre. 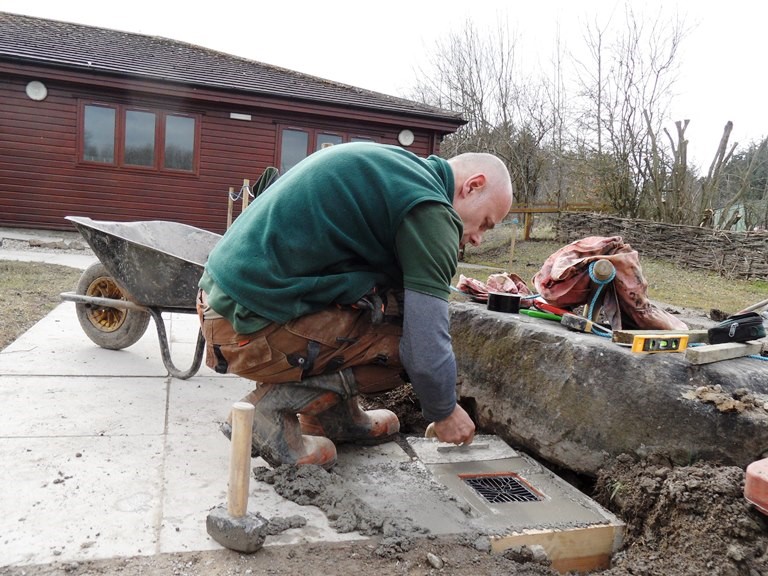 We tidied up and topped up paths that have had heavy use by the quad bike over the last few weeks.

While doing so we found this ground beetle.

Most ground beetles are voracious predators, with both larvae and adults being carnivorous. As the name suggests, many spend their time on the ground and some can’t fly due to having fused wing cases which act as protecting armour.

I don’t often comment on here because what I have to say is so repetitive.  But as the end of the winter ‘worky’ season approaches and the frogs, toads and Mistle Thrushes announce the arrival of spring, I feel that this year more than ever, a huge thank you is due to everyone who has contributed so substantially and willingly to the vast amount that has been achieved on the reserve since last October.  I must firstly acknowledge the Reserve Managers who have just experienced their first winter and their first coppice block. Neither are particularly easy, and they have been racing against the clock to get the work done conscious of the developing shoots of flowers hiding just below the surface waiting for the sunshine.  To the many volunteers who have given hours of their time and effort both during the week and over the weekends I also pay tribute.  Foxglove can be a mean place during the dark, cold, wintry days yet the work has gone on.  Behind the scenes others have dealt with office work, gift aid, fund raising, new projects, HLS claims, routine correspondence, and endless other tasks that few are aware of. The ponies have been looked after, nest boxes repaired, CCTV wiring replaced, hay removed, gorse scarified, food cooked, and drainage inserted. During the last couple of weeks many of the trees have been crowned, some ponds partially cleared, paths repaired - and all the time the water levels have been monitored and the bunds maintained.  Little did we ever imagine the plethora of different jobs that would need to be done to allow the reserve to remain attractive and flourish.  The bird ringers have continued to catch birds throughout, producing more and more recoveries in their quest to discover where the birds that visit the reserve travel to and from, and how long they live.  I wish to personally and sincerely thank every one of you who has contributed in some way or other to the well being of Foxglove and all that it stands for during this recent busy period.  Masses of things have been accomplished over a very wide spectrum, and I know we will see the benefits over the coming spring and summer months. I hope you are all proud of the part you have played.