Despite the dull start to the day, we have had a total of eleven volunteers working at Foxglove today.  While some have been continuing the work on monitoring the species using the nest boxes around the reserve, the Tuesday group have been working to keep parts of the reserve clear. 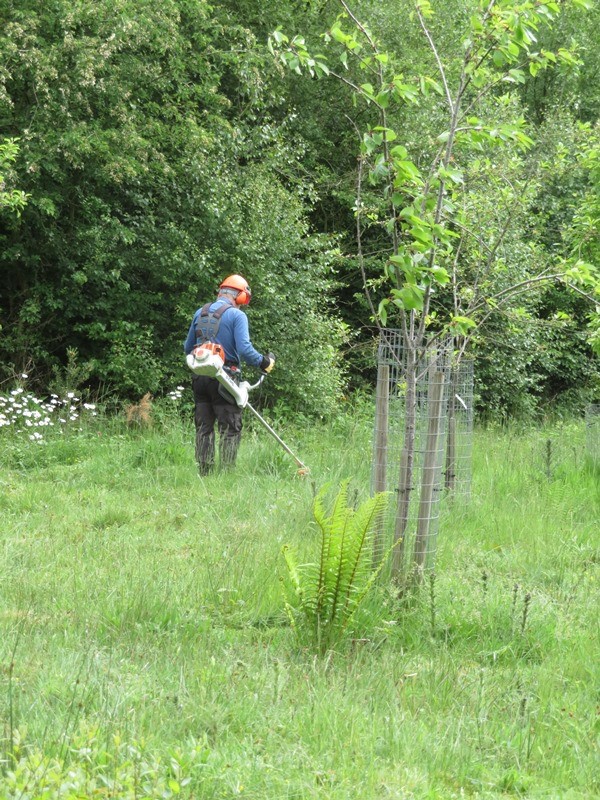 Eddie has moved on to strimming the Soft Rush that is growing on the orchard near to the Field Centre.  This has to be a delicate job as there are a range of Orchids growing here as well as Bugle and Tormentil.  Others have been cutting and strimming the network of small paths used to get between the net rides and which were becoming overgrown.  Thanks to both the Johns for doing this and filling potholes in the access road.

Once Ian (the volunteer) had finished strimming here, he moved on to cut the grass at the front of the Field Centre.  Meanwhile Colin took a break from his regular rounds to fill the bird feeders to have a chat to a couple of new visitors to the reserve.  Yesterday, we had a regular group of mothers with young children who come to Foxglove every Monday, and today seems to have been a day for new visitors as all but the group from the Dales School were new to the reseve.

Having said that, the Moorhen chick that had been hiding under the dipping platform obviously was less impressed and made a careful bid for freedom by stealthily following the line of vegetation around the pond.

Ian (Reserve Manager) chanced upon a couple of amphibians in the Heathland area.  While nothing was found under the metal sheet put out to provide these creatures with a place to warm up, the small water area seemed ideal for this Great Crested Newt and Common Toad.

For those who like to take a more relaxed approach to wildlife watching, there are always the camera traps.  This one in Risedale Beck often shows nothing but leaves and must be triggered by movement and changes in light.  In this case, it's caught a Roe Buck during the day.  Clearly the deer is not scared by the camera as it returned at night so close to suggest it might be posing for a selfie.