Winter’s Still With Us

The snow started to fall not long after we arrived at Foxglove this morning and continued for much of the day until we had a sunny finish to the afternoon.  There were less volunteers in than normal and they were split between those who stayed at Foxglove and those who went to help Tony and Matt put up new owl boxes.

Lark and Taurus were clearly interested in any food that might be on offer as, although they are hardy and can survive happily through the cold days of this month, there is less nutrition available until the grasses start growing again.  Taurus took the lead in the search for pieces of apple or carrot - a good reminder why we ask people not to feed them so that they don't associate all people with being fed. 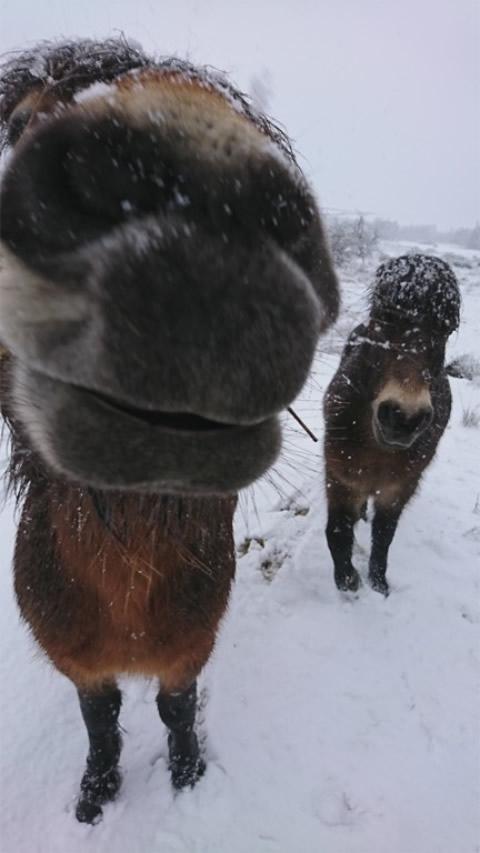 Ian worked with Mac and John, two of the Volunteers, on cutting back the vegetation on net ride 25.  As they were carrying on from the work on the other net rides last week, they are becoming much quicker at doing this so that the work was completed by lunchtime.  This has left a pile of brash for the Thursday Volunteers to burn. 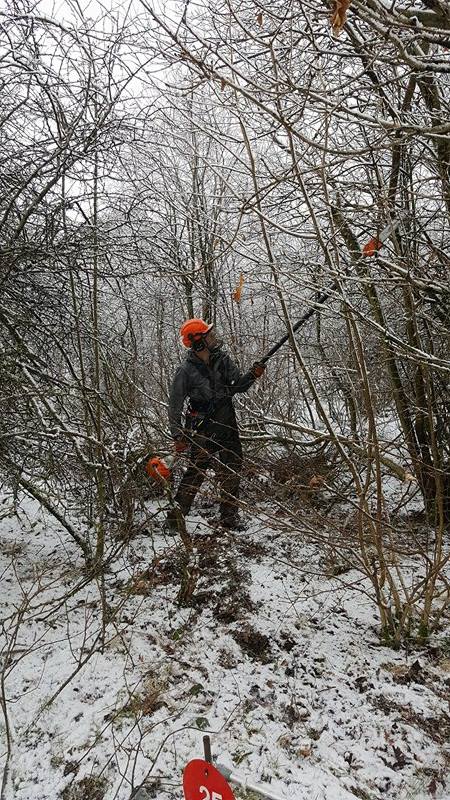 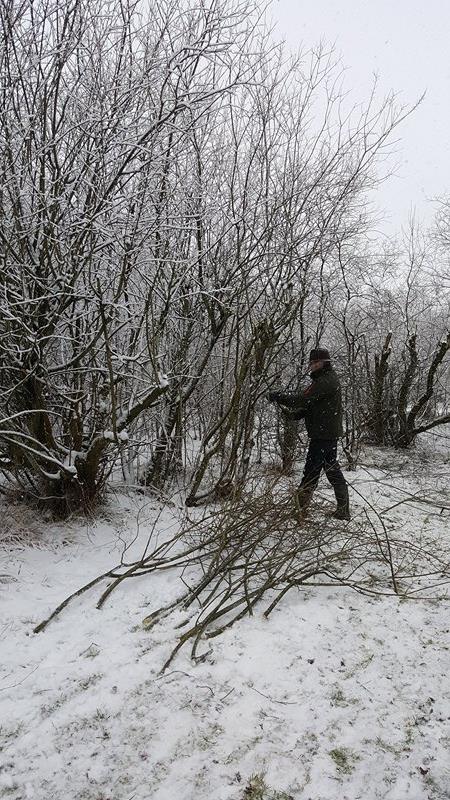 Another job was to check trees that had been staked and tied before the latest storms and high winds.  One had blown over because the strength of the wind had been enough to snap one of the newer, thicker tree ties, while a second was on the ground because a thick stake had snapped.  A couple of hours work here meant that all of these were re-staked and a number of other thin tree ties were replaced with the thicker ties.

An inspection of the perimeter fence at the end of last week had shown that a young Ash tree had managed to grow through one of the holes in the chain link fence.  Not thick enough to cause any damage at the moment, if left it would damage the fence and so has been removed.  On the way back to the Field Centre, there was time to admire Ian's handiwork in constructing the new vole raft for the Vole Ponds, watch a couple of Roe Deer quietly feeding among the Scots Pines, and then stumble upon these large footprints in the snow.  If the size wasn't enough to be able to give an idea of who they belonged to, the Grey Heron who featured in yesterday's blog took a couple of seconds to decide that flying off might be a good idea.

The ponies had by now settled to alternately clearing snow to uncover the grass or were gingerly taking bites from the Gorse bushes as the snow was melting in the late afternoon sun.  That sunny finish to the afternoon means that, with clear skies, the temperature is going to drop below freezing tonight - not much point in putting out the moth trap really!